I have a confession to make. I saw the film version years ahead before reading the book. Though I remember liking the film, I knew I had to read the book because I thought I have missed some of the important details. 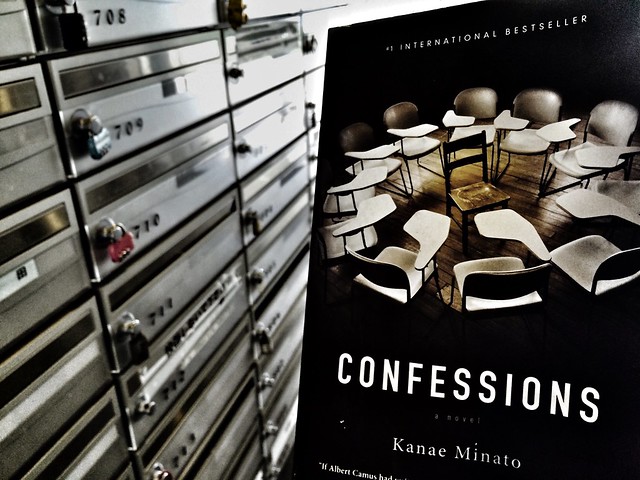 Behind stage curtains,
she performed arias of spring.
Her sterling voice echoed
through the dense auditorium.

Now, behind steel curtains,
she renders a shrill  twittering.
Fortissimo of pathos
melodies resonates
through the asylum.

As soon as I started reading, the scenes from the movie kept on playing in my mind. I am not sure if it was a good thing or not but at times it felt good, as if I was about to confirm something. For the synopsis, you can click here.

"Her pupils killed her daughter. Now, she will have her revenge."


The first chapter set the tone. I thought this was the strongest part of the book. The way the teacher dropped the "bomb" in front of the class was pure evil, a complete mindf*ck.


The other chapters were a way of re-telling what had happened that day as well as before and after the incident. While the succeeding chapters could be repetitive, a confession of sort from various characters, there was always a twist or two or new details that came up. Most of them were unexpected and gave a thrill to this reader to continue reading.


I also enjoyed the chapter as told by by Student B's sister. It was the juiciest considering she was not a main character.


Just like in the movie, I thought the last chapter is the weakest in terms of the story line or impact. It should be the stand-out as it was Student A's. Though the teacher's way of revenge is still heartless, it could have been executed differently. I still understand why she did that but it was over the top given the limited time. Or maybe it was just another mind game, I’d like to think of. I felt it was a bit of a disconnect.


Kanae Minato fully used the elegant style of Japanese writing, subtle and poetic. The book was beautifully written though I feel that some of it were lost in translation. I don’t speak Japanese but some of its words and expressions are difficult to translate. The way it was written and the voice of each narrator were so fragile despite of its dark theme. This was the charm of the novel making it an easy read despite its twists and turns.


I guess I have to watch the movie again now that I have read the book. Here's the trailer of the movie.

Ending my review with a quote from the book.

Happiness is as fragile and fleeting as a bubble soap. Water down the last dregs of happiness and turn them into bubbles to fill the void. It may nothing more than an illusion, but it was still better than the emptiness.