So I guess I will continue to randomly pick books in the bookstore. This is the second book I bought which I never heard of but ended up enjoying every page. As long as it has a nice cover and a not-so-thick number of pages, I guess I will give it a try. Again. 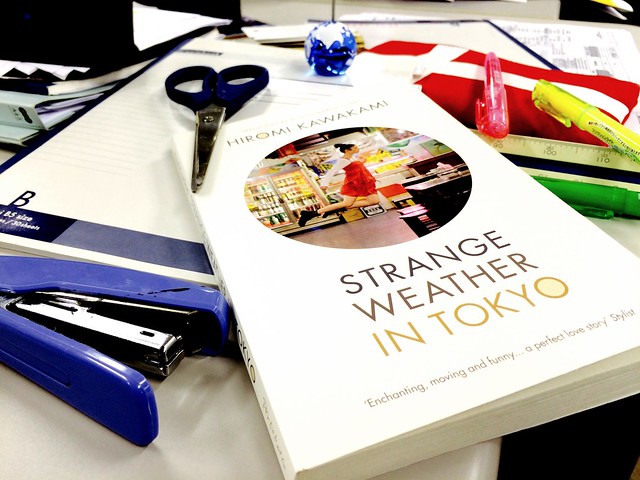 
The plot is simple, complicatedly simple if there’s such thing. Basically, it is about Tsukiko, an almost-40-year-old lady who had a chance encounter with one of her former sensei (teachers) in a bar. And the rest of their encounters came naturally.

Living in Japan for more than 8 years made this an easy read for me. The sounds, details, visuals in the books are very close to reality. Izakaya (drinking bars in Japanese) played is the core of the story. Some may wonder if it’s possible for someone to go to a bar every night or every other night. It is and in Japan, izakaya is a big business. Maybe bars like these are more welcoming to lost and empty souls aka regular employees. A place where they can find temporary happiness.

The focus of the story never veers away from Tsukiko and Sensei which is a plus factor, at least for me. Not so many sub-plots except that of Kojima’s and Satoru’s which is essential to make the characters more realistic and alive. The progress and development of the relationship between Tsukiko and Sensei may raise some eyebrows especially with the age gap but it is actually quite endearing. Maybe because both characters showed restraint and control before falling into the trap called love.

Another aspect of the novel that is worth commending is the particularity of the details. It draws you into their world making you a part of the novel. It’s like watching Koreeda or Ozu masterpieces. It also feels like poetry. Hiromi Kawakami did a great job with it. Without the details, it will be very flat.

Also, kudos to the translation. I personally think it was great since it still has the Japanese vibe which is very important in keeping the heart of the story.

If there’s one thing that I don’t like, it’s the title “Strange Weather in Tokyo”. I would have preferred “The Briefcase”. And although the floating lady on the cover is one of the main reasons why I bought the book, she’s irrelevant to the novel.

Ending this review with my favorite quote from the book.

A person can learn all manner of things,
no matter where he finds himself,
provided his spirit is determined.