I have a confession to make. I’m afraid of heights. I really do. Until now I have this uneasiness of flying. Knowing that I’ll be up on air, I usually don’t sleep night before my scheduled flight.

But for the last five years, I am continuously challenging myself to get rid of this fear. I engaged myself in activities like bungee jumping, parasailing and just recently paragliding.


I’ve been anticipating this event for months and the idea of seeing Fuji-san on its naked glory just double the excitement. I have attempted to take photos of this majestic mountain and failed twice. Was I prepared for this activity? I thought so as I avoided watching paragliding related videos. Haha! And for the sake of photography, I have to fly and try taking photos on air! Damn to this addiction.

Anyway, the weather was perfect last Sunday. Not too hot, not to cold and Mt. Fuji was showing off to the delight of everyone. We arrived at Asagiri Paragliding School at around 0930H and were then informed that we can no longer be accommodated since there are lots of enthusiasts who arrived before us. We were further told that we can jump probably after lunch. It was quite disappointing to hear it but perhaps it has a purpose. I, Ate Maki, Kuya Rad, Attorney and Jane immediately positioned ourselves in different spots within the landing area just to be busy. However, in less than five minutes, one of the senseis told Ate Maki that there’s an available tandem paragliding slot as one of the enthusiast backed-out. Ate Maki asked me if I am interested in trying and I said without blinking, YES! Off we went to the plateau, the take-off area, approximately 1,000 meters from the ground via an improvised train-like transportation. Its not that high actually, its very high! And its very steep. And the group joked that after my jump they will be using past tense in addressing totomai.

At the take-off area I was called by one of the senseis to ready myself. I submitted but my heartbeat’s rhythm was much stronger than the rustling leaves and weeds as well as the whispering winds. The instructions were in Japanese, and I can only reply with a smile and an unsure hais. Glad that I have Ate Maki by my side, who serve as a photographer, interpreter and a mother. And as guiding Diyosa. Haha!

While on the platform, and waiting for the go signal, I stood there emotionless. I felt nothing actually and I thought my spirit left my body for a split second. I only moved after the sensei shouted the magic word. I ran but I can’t feel that I was running (or I didn't run after all), all I see was I am almost on the edge of the cliff and I have nowhere to turn but to face it. Every thing was blurry. But hey, I waited for the flashback of my life but to no avail. Haha! It only means one thing, I will be landing safely.

Up on the air, I felt like a weightless individual, like a spirit, like a soul gliding in an open space. I refocused and tried taking photos of anything despite my trembling hands. It was great. The sensei even told me to take a photo of my foot! It was a good idea coming from him. Haha! 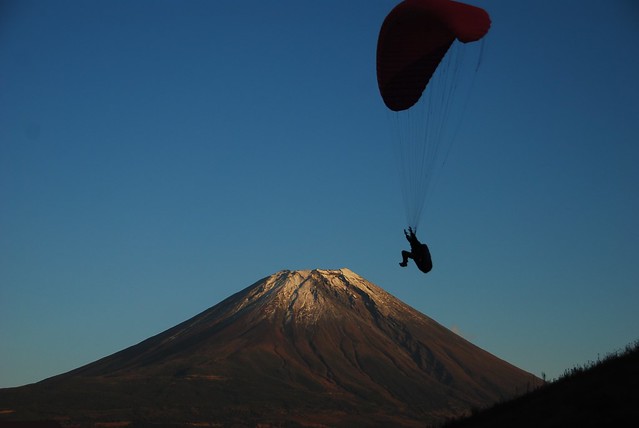 
It was so fast that I didn’t notice that I am about to touch the land soon. If only I could stay there like for an hour or so, exploring the place from above perspective. If given the chance to jump or fly again, I would do it in a heartbeat.

And just when I thought that my fear of heights had diminished, my hands perspired like it hadn’t perspired for thirty years the moment we went back to the platform. But the journey of going down from the platform via that improvised train was much worse.

Photos of me during the course taken by Ate Maki and Kuya Rad.

Believe me, paragliding is not that scary. Just condition yourself that you will land safely. Thanks to all my friends for the moral support too. But wait, was it really a moral support? Or the other way around? Love you guys!


And please, still address me in the present tense. I feel like I'm missing my backbone though.